Are YOU A Binge Watcher? 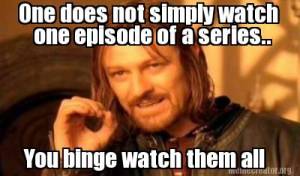 Understandably, people have a different view of binge watching but as a broad definition, I see it as watching a number of episodes of a television show in a rapid succession with no breaks within a certain time period; with a ‘number’ being 3 or more episodes. I hope to explore this in light of how other people define binge watching and whether they think that the definition changes based on the way it is explored by individuals.

As well as interviewing or using vox pops, I have designed a survey to get a broader understanding of these parallels and differences between male and female binge watchers as a whole and whether the trends seen by one gender are the same as the other.

COLLEGE HUMORS TAKE ON BINGE-WATCHING AND ITS DANGERS

← The Twitter #Revolution
The Internet of Things (IoT) & Quantifiable Self →